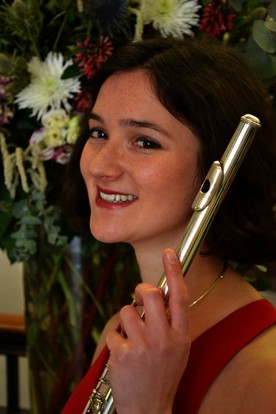 Meera Maharaj enjoys a diverse performing career throughout the UK and beyond. A keen chamber musician, she is currently a Tunnell Trust, Park Lane Group and Countess of Munster Recital Scheme artist, together with pianist Dominic Degavino. Her duo with guitarist James Girling, was formed in 2013 and as the Meraki Duo they enjoy frequent concerts across the UK. In 2019 they were finalists in the Royal Overseas League competition and are current International Guitar Foundation Young Artists.

She graduated with Distinction in her Masters, studying with Michael Cox at the Royal Academy of Music, where she received generous scholarships supported by Sir Elton John, Countess of Munster Musical Trust andHelp Musicians UK Postgraduate Awards. In 2017, she graduated from the Royal Northern College of Music with first class honours, having studied with Wissam Boustany and Laura Jellicoe. Previously, she spent six years at the Junior RNCM.

In 2018 Meera won a place in the Pro Youth Philharmonia and has previously participated in the BBC Philharmonic Orchestra’s Professional Experience Scheme. In addition, she enjoys improvisation, frequently incorporating this discipline into recitals as well as collaborating with other art forms. Jazz and music from across the world is also of great interest to her.

Meera has given solo/duo performances at the Concertgebouw, Bridgewater Hall, Wigmore Hall, Kings Place, St Martin in the Fields and St James’ Piccadilly with a busy forthcoming concert diary across the UK. She has organised a number of annual concerts in aid of her local Foodbank.